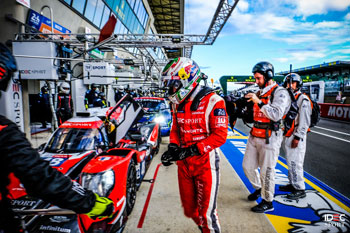 History speaks for these kilometers that make up the roads of Le Mans...

Le Mans, France- (by Canal WEC) - The three qualifying sessions were held for the 87th edition of the 24 Hours of Le Mans, and Mexican driver Memo Rojas Jr., will start with IDEC's # 48 car Sport Racing next Saturday from the fifth position in the wonderful line of La Sarthe.

The French team along with the Mexican driver and his fellow Gauls, were working with their engineers on the performance of the car in long stints, leaving aside the speed needed to achieve a better position on the grid. The competition will be very rudimentary against pilots and teams of very high level, besides facing the stroke of La Sarthe.

History speaks for these kilometers that make up the roads of Le Mans, and it is precisely history that Rojas will seek to write together with his companions on this fourth occasion that the Mexican faces the greatest test of endurance in international motorsport. The objective is victory and, above all things, to leave the name of Mexico very high.

It only remains to make the classic parade this Friday through the streets of Le Mans, and Saturday morning if perhaps verify with some light runs the Oreca07-Gibson in the Warm Up, and then at 3 o'clock in the afternoon, time French, the French tricolor flag falls indicating the start of the 87th edition of the 24 Hours of Le Mans.

MEMO ROJAS - # 48 IDEC Sport Racing
"Today was a very busy day in which we were trying to get the best balance in the car for both qualifying and for the race. We try to give priority to work for a career, because as you know, this is a very long race and it is important to have a good car. We managed to qualify in the fifth position which leaves us satisfied as we are relatively close to the fight with our principals, and above all, our race pace has shown to be quite strong. We believe that we have weapons to fight, it will not be easy, there are five cars that we can fight for the victory and anything can happen. We will be doing everything possible to fight for the victory. Thanks for being on the lookout. We are going to give everything we have to get a podium in this legendary race. I want to thank my sponsors TELMEX, TELCEL, Banorte, Red Bull, KYVR Fund, Office Depot, INTER and Club Premier."